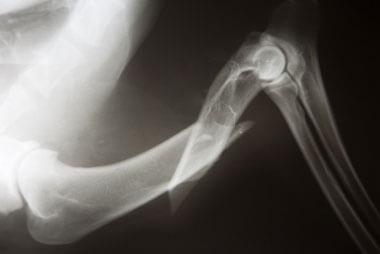 The ability to actively move about without pain is necessary for a dog or cat’s quality of life. Unfortunately, injuries, physical stress on joints and ligaments, and, in some cases, genetics can result in a pet (dogs more than cats) becoming lame and experiencing pain due to problems in their joints and ligaments.

When an accident occurs and your pet suffers a broken bone, the veterinarians at Seven Hills Veterinary Hospital are equipped with several different methods to repair the injury, from internal fixation such as bone plates to external coaptation such as casts.

Obesity is a growing problem with pets, as many dogs and cats are not only living longer, but also are eating more and exercising less. In addition to exposing them to the risk of developing diabetes, the extra weight puts more strain on joints, which can lead to a number of orthopedic problems, some of which may require orthopedic surgery.

Another increasingly common orthopedic problem in dogs is anterior cruciate ligament rupture (ACL). An ACL injury or rupture results in severe pain and lameness, which, if untreated, will lead to degenerative joint disease. Among the injuries that cause the ACL to rupture or tear in one of a dog’s legs are slipping on a slick surface, a quick change in direction when running, or being hit by a car. Obesity is another major cause of ACL rupture, which is why your pet’s diet and exercise are important for its overall health and well-being.

There are various treatments for a torn ACL, but none can repair the ACL. One of the best procedures for restoring the dog to his or her pre-ACL rupture condition is known as tibia plateau leveling osteotomy, or TPLO. TPLO stabilizes and reduces the stress on the knee joint, thereby allowing the dog’s leg to perform normally and without pain. The veterinary staff at Seven Hills Veterinary Hospital has extensive experience and success with this procedure.

Seven Hills Veterinary Hospital, Inc   review us!
Back to top